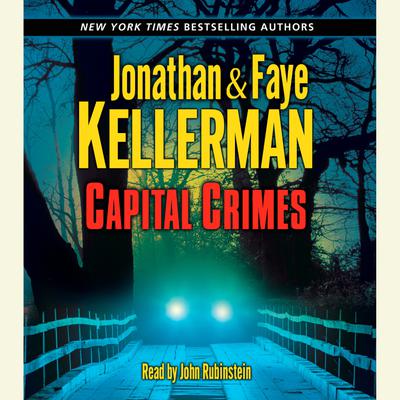 Internationally bestselling novelists each in their own right, husband and wife Jonathan and Faye Kellerman team up for a powerful one-two punch with Capital Crimes, a gripping pair of original crime thrillers set in two cities rich in atmosphere, and featuring appearances by the authors’ signature heroes: LAPD lieutenant Peter Decker and psychologist sleuth Dr. Alex Delaware.

Progressive state representative Davida Grayson fits in well with her Berkeley constituents. But some of Davida’s views have made her unpopular elsewhere. Davida’s foes are numerous: politicians on the other side of the aisle, racist hatemongers, even dissenters in her own party. Still, no one suspects that any buttons Davida might push could evoke deadly force.

But now Davida lies brutally murdered in her office, and Berkeley homicide detectives Will Barnes and Amanda Isis must unravel Davida’s complex, surprising life in order to find her killer. As they dig deeper, Will and Amanda realize that the real Davida Grayson was someone the public never knew. The investigation draws the detectives into a labyrinth of hidden sexuality, dark secrets, betrayal, and bloody vengeance that leads tortuously into madness. With time short and the suspect list long, Barnes and Isis must find the answers before the killer pulls off a repeat performance.

Baker Southerby, the son of musicians, was a child prodigy performer. But something Baker won’t talk about leads him to quit the honky-tonk circuit, become a Nashville cop, and never look back. His partner, Lamar Van Gundy, is a would-be studio bassist from up North who never quite made the cut in Music City, so instead earned himself a detective’s badge. Now both men are members of Nashville PD’s elite Murder Squad, with a solid record for solves. But when they catch a homicide that’s high-profile even for a city where musical celebrity is routine, their skills are tested: Jack Jeffries, a rock legend who cast aside personal demons and emerged from retirement to perform at a charity benefit, has been discovered in a ditch near the Cumberland River, his throat slashed.

It’s a whodunit as heartbreaking as it is baffling. Southerby and Van Gundy understand the rhythms of the music biz as intimately as the streets they work–and know that both have their dark sides. What the detectives don’t realize is just how high the price of success can be. Long before the last notes of Jack Jeffries’s final song have faded, Southerby and Van Gundy will learn about the dangers of concealing a hidden past . . . the hard way. Capital Crimes is page-turning, psychologically resonant suspense–just what we’ve come to expect from two of the world’s most successful crime writers.