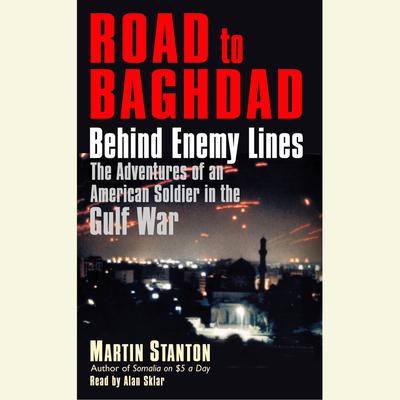 Behind Enemy Lines: The Adventures of an American Soldier in the Gulf War

In 1990, U.S. Army Major Martin Stanton was a military advisor stationed in Saudi Arabia. Encouraged by the Army to broaden his cultural horizons, and assured by the U.S. embassy that Kuwait was perfectly safe, Stanton took off for a long weekend there. Roused by gunshots his first night in Kuwait City, Stanton looked out the window and discovered he was in the middle of a full-scale invasion.

Iraq’s Gulf War had begun—and in the Kuwait City Sheraton, overlooking the entire western part of town, the United States had inadvertabtly encouraged an Army officer to go "behing enemy lines". As fighting continued and bullets hit the hotel’s facade, Stanton began phoning in intelligence reports to his superiors. He noted the arrival of the first tanks and their strategic deployment—to places with the most shade—as well as the Sheraton’s transition from hotel to Iraqi military headquarters. From the top floor of the hotel, Stanton would scour the surrounding streets with his binoculars, then descend to the lobby, where he’d lounge around the door of the Iraqi command post’s map room—conveniently converted from the Sheraton’s conference room—gleaning what he could and reporting back intelligence. Without a doubt, the Pentagon had unwittingly scored a major coup.

Yet Stanton’s prime “position” was short lived. Rounded up by the enemy, he would spend the next four months in Iraq as one of Saddam’s “guests”— also known as human shields—as the western “hostages” were shifted among various strategic facilities: chemical weapons factories, oil refineries, and power plants. Despite his dire circumstance, Stanton nevertheless strove at all times to do his duty to the best of his ability by continually taking notes and looking for ways to smuggle out information. In his role as a roving human shield, Stanton saw more of Iraq than he ever wanted to. Fortunately, he was released in time to fight the Gulf War with his Saudi unit.

With the same insight and intelligence evident in his first book, Somalia on $5 a Day, Martin Stanton has produced another fascinating account that offers readers a rare glimpse of a different time in the Middle East, when Saddam Hussein was at the height of his power and ambition, and when the U.S. was simply trying to repel an invader.