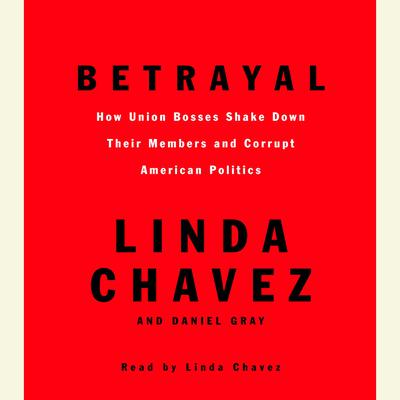 How Union Bosses Shake Down Their Members and Corrupt American Politics

“Simply put, the leftist labor unions have the Democrats in their pockets. And we’re all paying the price.”

Linda Chavez, President George W. Bush’s original choice for Secretary of Labor and a former union official, is one of the foremost authorities on America’s labor unions. Now, in the explosive new book Betrayal, she and fellow union expert Daniel Gray expose the corrupt bargain between the labor movement and the Democratic Party.

Committed to a far-left political agenda—and to enhancing their own power—union bosses funnel at least half a billion dollars into Democratic coffers every year. And they do it, illegally, by using dues money that workers are forced to pay as a condition of their employment—dues money that each year brings the unions $17 billion, all of it tax-free.

What do labor bosses get in return? The power to call the shots in Democratic campaigns and on party policy, extraordinary influence at all levels of government, billions of dollars in taxpayer-funded federal grants, and special legal privileges that leave them free to act as they please, no matter the consequences for the American people. The cycle of corruption is seemingly endless.

Chavez and Gray name names, exposing the many politicians who are in Big Labor’s pocket—including the leading lights of the Democratic Party. Betrayal also reveals:

• Big Labor’s all-out efforts in the 2004 election, including how just one local union has launched a $35-million campaign to unseat President Bush

• How Americans now live under a system of legal apartheid—one set of rules for labor bosses, another for the rest of us

All of us foot the bill for this corrupt system. Now it’s up to us to do something about it.