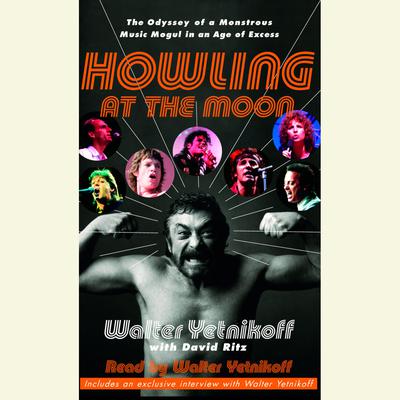 Howling at the Moon - Abridged

During the 1970s and '80s the music business was dominated by a few major labels and artists such as Michael Jackson, Bruce Springsteen, the Rolling Stones, Bob Dylan, Billy Joel, Paul Simon, Barbra Streisand and James Taylor. They were all under contract to CBS Records, making it the most successful label of the era. And, as the company’s president, Walter Yetnikoff was the ruling monarch. He was also the most flamboyant, volatile and controversial personality to emerge from an industry and era defined by sex, drugs and debauchery.

Having risen from working-class Brooklyn and the legal department of CBS, Yetnikoff, who freely admitted to being tone deaf, was an unlikely label head. But he had an uncanny knack for fostering talent and intimidating rivals with his appalling behavior—usually fueled by an explosive combination of cocaine and alcohol. His tantrums, appetite for mind-altering substances and sexual exploits were legendary. In Japan to meet the Sony executives who acquired CBS during his tenure, Walter was assigned a minder who confined him to a hotel room. True to form, Walter raided the minibar, got blasted and, seeing no other means of escape, opened a hotel window and vented his rage by literally howling at the moon.

In Howling at the Moon, Yetnikoff traces his journey as he climbed the corporate mountain, danced on its summit and crashed and burned. We see how Walter became the father-confessor to Michael Jackson as the King of Pop reconstructed his face and agonized over his image while constructing Thriller (and how, after it won seven Grammies, Jackson made the preposterous demand that Walter take producer Quincy Jones’s name off the album); we see Walter, in maniacal pursuit of a contract, chase the Rolling Stones around the world and nearly come to blows with Mick Jagger in the process; we get the tale of how Walter and Marvin Gaye—fresh from the success of “Sexual Healing”—share the same woman, and of how Walter bonds with Bob Dylan because of their mutual Jewishness. At the same time we witness Yetnikoff’s clashes with Barry Diller, David Geffen, Tommy Mottola, Allen Grubman and a host of others. Seemingly, the more Yetnikoff feeds his cravings for power, sex, liquor and cocaine, the more profitable CBS becomes—from $485 million to well over $2 billion—until he finally succumbs, ironically, not to substances, but to a corporate coup. Reflecting on the sinister cycle that left his career in tatters and CBS flush with cash, Yetnikoff emerges with a hunger for redemption and a new reverence for his working-class Brooklyn roots.

Ruthlessly candid, uproariously hilarious and compulsively readable, Howling at the Moon is a blistering You’ll Never Eat Lunch in this Town Again of the music industry.