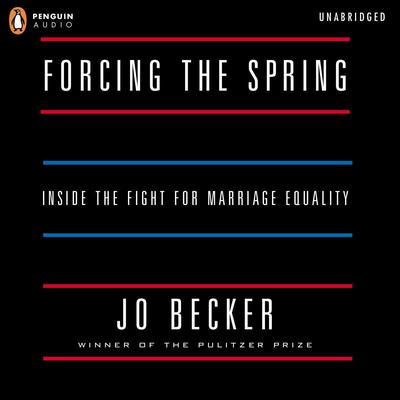 Inside the Fight for Marriage Equality

Forcing the Spring begins on Election Night 2008, when a controversial California ballot initiative called Proposition 8—which removed the right of gay men and women to marry—passed alongside Barack Obama’s stunning victory.

Forcing the Spring details how a small but determined group of political and media insiders took the fight for marriage equality all the way to the Supreme Court. Gay activists and Hollywood liberals joined together to enlist attorneys Ted Olson and David Boies—the opposing counsels on the Supreme Court’s infamous Bush v. Gore ruling—to bring a controversial legal case against Proposition 8 before the highest court in the land. Forcing the Spring is the extraordinary ringside account of this unprecedented effort to shift public opinion and reengineer the political certainties of an era.

Based on original interviews and in-depth reportage, Forcing the Spring is the work of Pulitzer Prize–winning journalist Jo Becker, after she was exclusively embedded with the plaintiffs’ legal team for more than four years, attending every day of the trial and every appellate argument. Offering behind-the-scenes coverage on the Obama administration’s role—with access to all the key players in the Justice Department and the White House—Becker reveals the true story of how the president came around to embrace marriage equality and play a surprisingly critical role in the Supreme Court battle. Following the lawyers in the chambers, the political operatives in the strategy rooms, and the heroic couples at the center of this historic lawsuit, Becker weaves together the many threads of the campaign into an inspirational and eye-opening narrative.

An exclusive account of a national civil rights struggle, Forcing the Spring carries readers from the first efforts to stop Proposition 8 and the campaign to undermine the Defense of Marriage Act all the way to the final suspenseful moments in the Supreme Court. A multi-angled work of journalism that examines all sides and all participants of this groundbreaking movement, Forcing the Spring is the definitive account of the fight to win the rights of marriage and full citizenship for all.