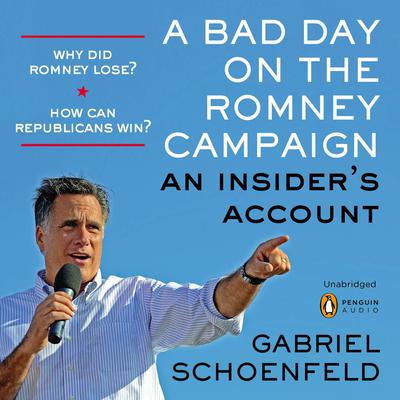 A Bad Day On the Romney Campaign

Why did Romney lose? How can Republicans win?

In A Bad Day on the Romney Campaign: An Insider's Account, Gabriel Schoenfeld, a senior adviser to the Republican presidential nominee Mitt Romney for nearly two years, for the first time speaks out about the internal failures of the 2012 campaign.

Why did Romney lose? The book illuminates the chain of errors that ultimately contributed to Romney's defeat. Schoenfeld's original conception--he zeroes in on a single gaffe on a single day, examining its genesis and its profound ripple effects on the presidential contest--makes A Bad Day on the Romney Campaign a uniquely fascinating contribution to our understanding of American politics and the challenges facing a Republican party that has lost the popular vote in five out of the last six presidential elections.

Adding to its interest, Schoenfeld does not shrink from pointing fingers and naming names. Unsparing in his criticism of some of his former colleagues, and presenting a candid appraisal of Romney's strengths and weaknesses, his objective is to launch a far-reaching debate about the way we go about choosing America’s leader. Offering a remarkably candid discussion of how Romney and his team formulated domestic and foreign policy, the book is a powerful voice in the ongoing discussion of the future of the Republican Party written by a Romney campaign insider who is also one of America's premier analysts of public affairs.

A Bad Day on the Romney Campaign is for Republicans, Democrats, and all Americans. Rich with detail and full of high drama, it will be of interest to anyone who wants to go behind the scenes to gain an inside look at how our political system actually operates, with all of its charms and all of its flaws.

"There is an obvious tension between a democratic public's need for information—its right to know—and the government's need, at times, for operational secrecy....Gabriel Schoenfeld brilliantly illuminates this fundamental dilemma in Necessary Secrets." --John McGinnis, The Wall Street Journal

“The weight of his book's scholarship, the timeliness of its publication and the audacity of its argument make it essential reading for anyone seriously interested in national security and freedom of the press in these testing times.”  --Leonard Downie, Jr., The Washington Post

“In his aptly titled book, Necessary Secrets, Gabriel Schoenfeld, a senior fellow at the Hudson Institute, has presented a subtle and instructive brief challenging the right of the press to make unilateral decisions to “publish and let others perish’….” --Alan Dershowitz, The New York Times Book Review

“Illuminating, extremely intelligent, learned, engaging, and important. This is a truly great book—the best account ever of the relationship between the press and the government concerning the protection and disclosure of national-security secrets, one that is centrally relevant to manifold national-security debates today." --Jack Goldsmith, Professor, Harvard Law School, and former U.S. Assistant Attorney General

“Necessary Secrets is a valuable history-with-attitude of the long war between the American government and the press over the protection and disclosure of secrets.” --Bill Keller, The New York Times Magazine