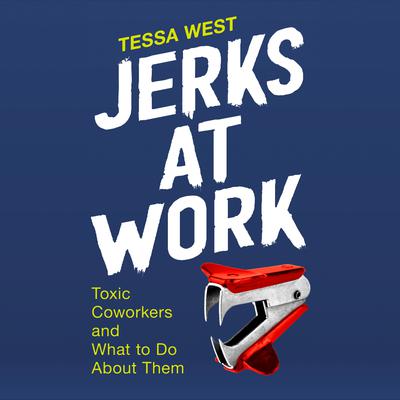 Toxic Coworkers and What to Do About Them

For anyone pulling their hair out over an irritating colleague who's not technically breaking any rules, a hilarious guide to getting difficult people off your back from NYU psychology professor Tessa West

Ever watched a coworker charm the pants off management while showing a competitive, Machiavellian side to the lower ranks? The Kiss-Up/Kick-Down coworker doesn't hesitate to throw peers under the bus, but their boss is oblivious to their bad behavior. What to do? In Jerks at Work, West draws on a decade of original research to profile classic workplace archetypes, including the Gaslighter, the Bulldozer, the Credit-Stealer, the Neglector, and the Micromanager, and gives advice to anyone who's ever cried in a bathroom stall at the office.

West digs deep into the inner workings of each bad apple, exploring their motivations and insecurities--for instance, micromanagers develop compulsive habits due to poor managerial training and public shaming--and offers clever strategies for stopping each type of jerk in their tracks, such as:


•  Bulldozers often gain extra influence in meetings by making sure they're the first person to talk, even by saying "let's start by all sharing our names," which research shows portrays them as powerful. Don't let them speak first!
•  Kiss-Up/Kick-down coworkers are so endeared to their managers that, if you have to report them, do it in small doses over time--otherwise, you'll trigger cognitive dissonance in your brainwashed boss.

Jerks at Work is the playbook that you wish you didn't need but you'll always turn to--and the answer to your endless "how to deal with a terrible boss" Google searches.