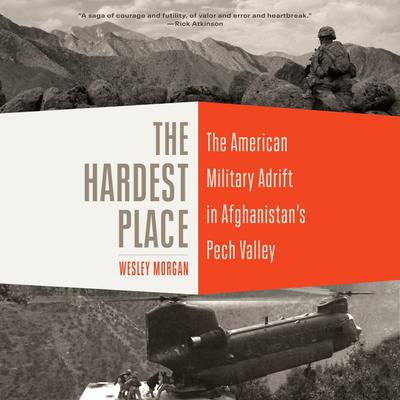 “The definitive account of America’s heroic but ultimately doomed effort in one of Afghanistan’s most rugged regions.”—Sebastian Junger, author of Tribe

“A saga of courage and futility, of valor and error and heartbreak.”—Rick Atkinson, author of the Liberation Trilogy

When we think of the war in Afghanistan, chances are we're thinking of a small, remote corner of the country where American military action has been concentrated: the Pech and its tributary valleys in Kunar and Nuristan provinces. The rugged, steep terrain and thick forests made the region a natural hiding spot for targets in the American war on terror, from Osama bin Laden to the Islamic State, and it has been the site of constant U.S. military activity for nearly two decades. Even as the U.S. presence in Afghanistan transitions to a drone war, the Pech has remained at the center of it, a testbed for a new method of remote warfare.

Wesley Morgan first visited the Pech in 2010, while he was still a college student embedding with military units as a freelancer. By then, the Pech and its infamous tributary the Korengal had become emblematic of the war, but Morgan found that few of the troops fighting there could explain why their remote outposts had been built. In The Hardest Place, he unravels the history those troops didn’t know, captures the culture and reality of the war through both American and Afghan eyes, and reports on the snowballing American missteps that made each unit’s job harder than the last as storied outfits like Marines, paratroopers, Rangers, Green Berets, and SEALs all took their turn.

Through reporting trips, hundreds of interviews with Americans and Afghans, and documentary research, Morgan writes vividly of large-scale missions gone awry, years-long hunts for single individuals, and the soldiers, Marines, commandos, and intelligence operatives who cycle through, along with several who return again and again to the same slowly evolving fight.

As the war drags on through its third presidential administration, Morgan concludes that we've created a status quo that could last forever in the Pech, with the military and intelligence agencies always in search of the next target.