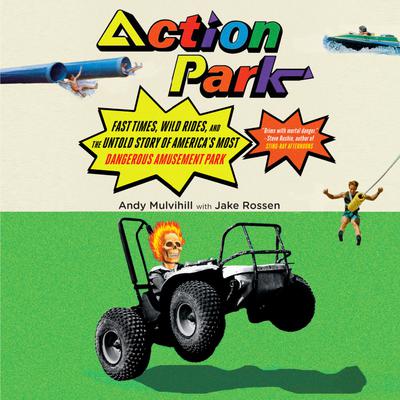 If you enjoyed Console Wars, then you’ll love Action Park.

“Growing up in New Jersey in the 1980s, I saw commercials for Action Park all the time. I begged my parents to take me but they refused, claiming it was too dangerous. After listening to this book, I would like to thank my parents profusely. Action Park's owner was the P.T. Barnum of the late twentieth century--a man who never let trivial inconveniences (like safety or physics) get in the way of his vision. An amazing history of a place that could never exist today.”

The outlandish, hilarious, terrifying, and almost impossible-to-believe story of the legendary, dangerous amusement park where millions were entertained and almost as many bruises were sustained, told through the eyes of the founder's son.

Often called "Accident Park," "Class Action Park," or "Traction Park," Action Park was an American icon. Entertaining more than a million people a year in the 1980s, the New Jersey-based amusement playland placed no limits on danger or fun, a monument to the anything-goes spirit of the era that left guests in control of their own adventures--sometimes with tragic results. Though it closed its doors in 1996 after nearly twenty years, it has remained a subject of constant fascination ever since, an establishment completely anathema to our modern culture of rules and safety. Action Park is the first-ever unvarnished look at the history of this DIY Disneyland, as seen through the eyes of Andy Mulvihill, the son of the park's idiosyncratic founder, Gene Mulvihill. From his early days testing precarious rides to working his way up to chief lifeguard of the infamous Wave Pool to later helping run the whole park, Andy's story is equal parts hilarious and moving, chronicling the life and death of a uniquely American attraction, a wet and wild 1980s adolescence, and a son's struggle to understand his father's quixotic quest to become the Walt Disney of New Jersey. Packing in all of the excitement of a day at Action Park, this is destined to be one of the most unforgettable memoirs of the year.