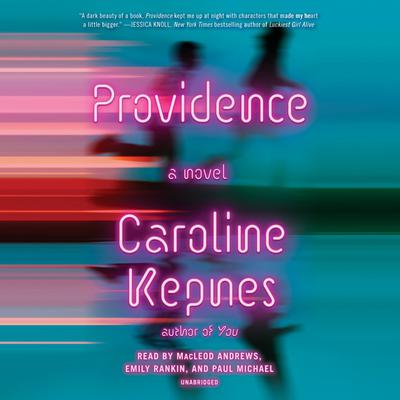 “If you're looking for another You and another Joe, this is not that book. Instead, Kepnes has created a different type of masterpiece. John is an odd kid, not popular and unloved except by his parents and his friend, Chloe. Then he is kidnapped by a substitute picture. Years later, he is released. He slept through his imprisonment, but his body has grown big and strong, and his looks have gone from nerd to hunk. He also awakens with an awful power. Despite their strong connection, their love for one another, John has to run from Chloe. They both drift- her into her art, he into a lonely existence that doesn't allow for closeness. Meanwhile, we meet Eggs, a detective who is suspicious about several deaths of seemingly healthy young people having heart attacks. I felt so strongly for these characters, all with their terrible traumas and all that love that was going by unspent. The audiobook is particularly amazing. The tone reminded me a bit of Unbreakable meets Lovecraft, and it was surprising and wonderful.”

“A dark beauty of a book, Providence kept me up at night with characters that made my heart a little bigger.”—Jessica Knoll, New York Times bestselling author of Luckiest Girl Alive

Best friends in small-town New Hampshire, Jon and Chloe share a bond so intense that it borders on the mystical. But before Jon can declare his love for his soul mate, he is kidnapped, his plans for a normal life permanently dashed.

Four years later, Chloe has finally given up hope of ever seeing Jon again. Then, a few months before graduation, Jon reappears. But he is different now: bigger, stronger, and with no memory of the time he was gone. Jon wants to pick up where he and Chloe left off . . . until the horrifying instant he realizes that he possesses strange powers that pose a grave threat to everyone he cares for. Afraid of hurting Chloe, Jon runs away, embarking on a journey for answers.

Meanwhile, in Providence, Rhode Island, healthy college students and townies with no connection to one another are suddenly, inexplicably dropping dead. A troubled detective prone to unexplainable hunches, Charles “Eggs” DeBenedictus suspects there’s a serial killer at work. But when he starts asking questions, Eggs is plunged into a whodunit worthy of his most outlandish obsessions.

In this dazzling new novel—and with an intense, mesmerizing voice—Caroline Kepnes makes keen and powerful observations about human connection and how love and identity can dangerously blur together.

“An artist, a mutated vigilante, a charming hunter, a sickly detective, and a literary lunatic: Caroline Kepnes brings them together in this propulsive and original story. It kept me up at night, scared and thinking.”—E. Lockhart, New York Times bestselling author of Genuine Fraud and We Were Liars

“The infinite talent of Caroline Kepnes shines through every page of this extraordinary tale. Providence is sure to be one of the best thrillers of the year.”—Mary Kubica, New York Times bestselling author of The Good Girl

“There is something for every reader in these pages—thrills, chills, and a complex love story. Kepnes is a writer to add to your must-read pile.”—Tess Gerritsen, New York Times bestselling author of I Know a Secret