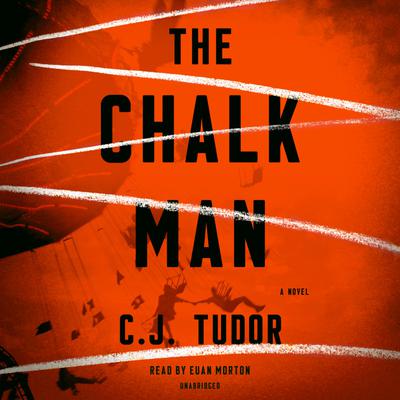 “The Chalk Man by C.J. Tudor is an unusually gripping mystery reminiscent of Arthur Conan Doyle's story 'The Adventure of the Dancing Men.' It is amazingly well-written, and the pace does not let up, from the shocking beginning all the way through to the unsettling ending. This suspenseful page-turner is definitely a cut above and will keep you riveted. Highly recommended!”

“Want to read something good?. . . If you like my stuff, you’ll like this.”—Stephen King • WINNER OF THE ITW THRILLER AWARD • WINNER OF THE STRAND MAGAZINE AWARD FOR BEST DEBUT NOVEL

A riveting psychological suspense debut that weaves a mystery about a childhood game gone dangerously awry, and will keep readers guessing right up to the shocking ending

In 1986, Eddie and his friends are on the verge of adolescence, spending their days biking in search of adventure. The chalk men are their secret code, stick figures they draw for one another as hidden messages. But one morning the friends find a chalk man leading them to the woods. They follow the message, only to find the dead body of a teenage girl.

In 2016, Eddie is nursing a drinking problem and trying to forget his past, until one day he gets a letter containing a chalk man—the same one he and his friends saw when they found the body. Soon he learns that all his old friends received the same note. When one of them is killed, Eddie realizes that saving himself means figuring out what happened all those years ago. But digging into the past proves more dangerous than he could have known. Because in this town, everyone has secrets, no one is innocent, and some will do anything to bury the truth.

Praise for The Chalk Man

“Wonderfully creepy—like a cold blade on the back of your neck.”—Lee Child

“An assured debut that alternates between 1986 and 2016 with unpredictable twists. The Chalk Man fits well with other stories about troubled childhoods such as Stephen King’s novella Stand by Me. . . . Tudor never misses a beat in showing each character as both a child and an adult while also exploring the foreboding environs of a small town.”—Associated Press

“Utterly hypnotic. The Chalk Man is a dream novel, a book of nightmares: haunted and haunting, shot through with shadow and light—a story to quicken the pulse and freeze the blood. A dark star is born.”—A.J. Finn, #1 New York Times bestselling author of The Woman in the Window

“If you can’t get enough of psychological thrillers with sharp twists and turns, you need to read The Chalk Man”—Hello Giggles

“I haven’t had a sleepless night due to a book for a long time. The Chalk Man changed that.”—Fiona Barton, New York Times bestselling author of The Widow

Gift audiobooks to anyone in the world (including yourself!) from the comfort of your home. You choose the membership (3, 6, or 12 months/credits), your gift recipient picks their own audiobooks, and Katy Budget Books is supported by your purchase.