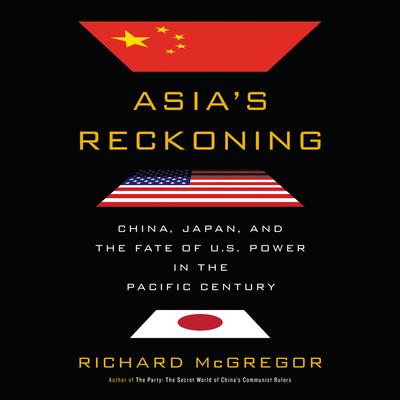 China, Japan, and the Fate of U.S. Power in the Pacific Century

A Financial Times Best Book of 2017

“A compelling and impressive read.” —The Economist

A history of the combative military, diplomatic, and economic relations among China, Japan, and the United States since the 1970s—and the potential crisis that awaits them

Richard McGregor’s Asia’s Reckoning is a compelling account of the widening geopolitical cracks in a region that has flourished under an American security umbrella for more than half a century. The toxic rivalry between China and Japan, two Asian giants consumed with endless history wars and ruled by entrenched political dynasties, is threatening to upend the peace underwritten by Pax Americana since World War II. Combined with Donald Trump’s disdain for America’s old alliances and China's own regional ambitions, east Asia is entering a new era of instability and conflict. If the United States laid the postwar foundations for modern Asia, now the anchor of the global economy, Asia’s Reckoning reveals how that structure is falling apart.

With unrivaled access to archives in the United States and Asia, as well as to many of the major players in all three countries, Richard McGregor has written a tale that blends the tectonic shifts in diplomacy with bitter domestic politics and the personalities driving them. It is a story not only of an overstretched America, but also of the rise and fall and rise of the great powers of Asia. The about-turn of Japan—from a colossus seemingly poised for world domination to a nation in inexorable decline in the space of two decades—has few parallels in modern history, as does the rapid rise of China—a country whose military is now larger than those of Japan, South Korea, Taiwan and southeast Asia's combined.

The confrontational course on which China and Japan are set is no simple spat between neighbors: the United States would be involved on the side of Japan in any military conflict between the two countries. The fallout would be an economic tsunami, affecting manufacturing centers, trade routes, and political capitals on every continent. Richard McGregor’s book takes us behind the headlines of his years reporting as the Financial Times’s Beijing and Washington bureau chief to show how American power will stand or fall on its ability to hold its ground in Asia.