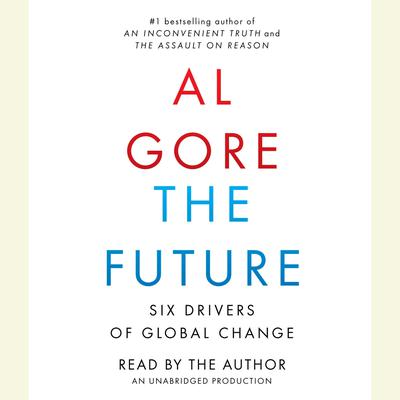 From the former vice president and #1 New York Times bestselling author comes An Inconvenient Truth for everything—a frank and clear-eyed assessment of six critical drivers of global change in the decades to come.

Ours is a time of revolutionary change that has no precedent in history. With the same passion he brought to the challenge of climate change, and with his decades of experience on the front lines of global policy, Al Gore surveys our planet’s beclouded horizon and offers a sober, learned, and ultimately hopeful forecast in the visionary tradition of Alvin Toffler’s Future Shock and John Naisbitt’s Megatrends. In The Future, Gore identifies the emerging forces that are reshaping our world:

• Ever-increasing economic globalization has led to the emergence of what he labels “Earth Inc.”—an integrated holistic entity with a new and different relationship to capital, labor, consumer markets, and national governments than in the past.
• The worldwide digital communications, Internet, and computer revolutions have led to the emergence of “the Global Mind,” which links the thoughts and feelings of billions of people and connects intelligent machines, robots, ubiquitous sensors, and databases.
• The balance of global political, economic, and military power is shifting more profoundly than at any time in the last five hundred years—from a U.S.-centered system to one with multiple emerging centers of power, from nation-states to private actors, and from political systems to markets.
• A deeply flawed economic compass is leading us to unsustainable growth in consumption, pollution flows, and depletion of the planet’s strategic resources of topsoil, freshwater, and living species.
• Genomic, biotechnology, neuroscience, and life sciences revolutions are radically transforming the fields of medicine, agriculture, and molecular science—and are putting control of evolution in human hands.
• There has been a radical disruption of the relationship between human beings and the earth’s ecosystems, along with the beginning of a revolutionary transformation of energy systems, agriculture, transportation, and construction worldwide.

From his earliest days in public life, Al Gore has been warning us of the promise and peril of emergent truths—no matter how “inconvenient” they may seem to be. As absorbing as it is visionary, The Future is a map of the world to come, from a man who has looked ahead before and been proven all too right.

Praise for The Future

“Magisterial . . . The passion is unmistakable. So is the knowledge. Practically every page offers an illumination.”—Bloomberg

“In The Future . . . Gore takes on a subject whose scale matches that of his achievements and ambition.”—The New York Times Book Review

“Historically grounded . . . Gore’s strengths lie in his passion for the subject and in his ability to take the long view by putting current events and trends in historical context.”—Publishers Weekly

“A luminously intelligent analysis that is packed with arresting ideas and facts.”—The Guardian