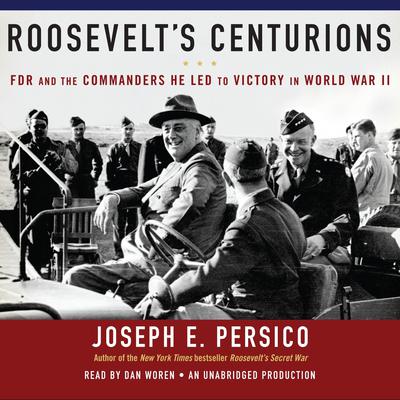 “FDR’s centurions were my heroes and guides. Now Joe Persico has written the best account of those leaders I've ever read.”—Colin L. Powell

All American presidents are commanders in chief by law. Few perform as such in practice. In Roosevelt’s Centurions, distinguished historian Joseph E. Persico reveals how, during World War II, Franklin D. Roosevelt seized the levers of wartime power like no president since Abraham Lincoln during the Civil War. Declaring himself “Dr. Win-the-War,” FDR assumed the role of strategist in chief, and, though surrounded by star-studded generals and admirals, he made clear who was running the war. FDR was a hands-on war leader, involving himself in everything from choosing bomber targets to planning naval convoys to the design of landing craft. Persico explores whether his strategic decisions, including his insistence on the Axis powers’ unconditional surrender, helped end or may have prolonged the war.

Taking us inside the Allied war councils, the author reveals how the president brokered strategy with contentious allies, particularly the iron-willed Winston Churchill; rallied morale on the home front; and handpicked a team of proud, sometimes prickly warriors who, he believed, could fight a global war. Persico’s history offers indelible portraits of the outsize figures who roused the “sleeping giant” that defeated the Axis war machine: the dutiful yet independent-minded George C. Marshall, charged with rebuilding an army whose troops trained with broomsticks for rifles, eggs for hand grenades; Dwight Eisenhower, an unassuming Kansan elevated from obscurity to command of the greatest fighting force ever assembled; the vainglorious Douglas MacArthur; and the bizarre battlefield genius George S. Patton. Here too are less widely celebrated military leaders whose contributions were just as critical: the irascible, dictatorial navy chief, Ernest King; the acerbic army advisor in China, “Vinegar” Joe Stilwell; and Henry H. “Hap” Arnold, who zealously preached the gospel of modern air power. The Roosevelt who emerges from these pages is a wartime chess master guiding America’s armed forces to a victory that was anything but foreordained.

What are the qualities we look for in a commander in chief? In an era of renewed conflict, when Americans are again confronting the questions that FDR faced—about the nature and exercise of global power—Roosevelt’s Centurions is a timely and revealing examination of what it takes to be a wartime leader in a freewheeling, complicated, and tumultuous democracy.