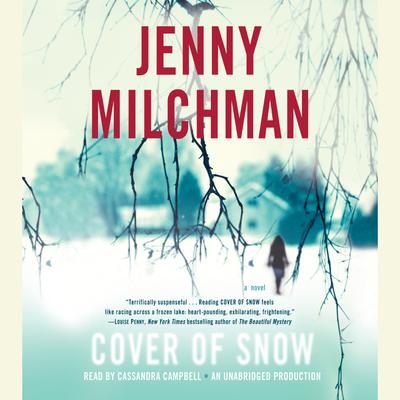 Jenny Milchman’s Cover of Snow is a remarkable debut, a gripping tale of suspense in the tradition of Gillian Flynn, Chris Bohjalian, and Nancy Pickard.

Waking up one wintry morning in her old farmhouse nestled in the Adirondack Mountains of New York, Nora Hamilton instantly knows that something is wrong. When her fog of sleep clears, she finds her world is suddenly, irretrievably shattered: Her husband, Brendan, has committed suicide.

The first few hours following Nora’s devastating discovery pass for her in a blur of numbness and disbelief. Then, a disturbing awareness slowly settles in: Brendan left no note and gave no indication that he was contemplating taking his own life. Why would a rock-solid police officer with unwavering affection for his wife, job, and quaint hometown suddenly choose to end it all? Having spent a lifetime avoiding hard truths, Nora must now start facing them.

Unraveling her late husband’s final days, Nora searches for an explanation—but finds a bewildering resistance from Brendan’s best friend and partner, his fellow police officers, and his brittle mother. It quickly becomes clear to Nora that she is asking questions no one wants to answer. For beneath the soft cover of snow lies a powerful conspiracy that will stop at nothing to keep its presence unknown . . . and its darkest secrets hidden.

Praise for Cover of Snow

“Well-defined characters take us on an emotional roller-coaster ride through the darkest night, with blinding twists and occasionally fatal turns. This is a richly woven story that not only looks at the devastating effects of suicide but also examines life in a small town and explores the complexity of marriage. Fans of Nancy Pickard, Margaret Maron, and C. J. Box will be delighted to find this new author.”—Booklist (starred review)

“Milchman reveals an intimate knowledge of the psychology of grief, along with a painterly gift for converting frozen feelings into scenes of a forbidding winter landscape.”—The New York Times

“Milchman makes [readers] feel the chill right down to their bones and casts a particularly effective mood in this stylish thriller.”—Kirkus Reviews

“Milchman tackles small-town angst where evil can simmer under the surface with a breathless energy and a feel for realistic characters.”—The Seattle Times

“The plot unfolds at an excellent clip . . . ultimately rushing headlong to a series of startling revelations.”—San Francisco Journal of Books

“Milchman expertly conveys Nora’s grief in a way that will warm hearts even in the dead of a Wedeskyull winter.”—Publishers Weekly (starred review)