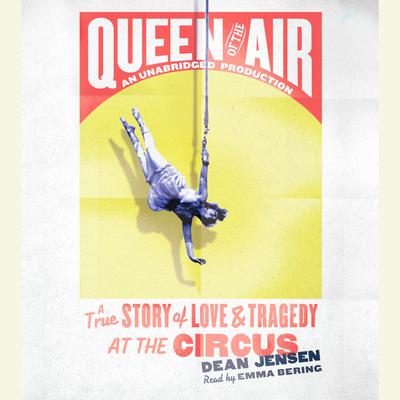 Queen of the Air

A True Story of Love and Tragedy at the Circus

A true life Water for Elephants, Queen of the Air brings the circus world to life through the gorgeously written, true story of renowned trapeze artist and circus performer Leitzel, Queen of the Air, the most famous woman in the world at the turn of the 20th century, and her star-crossed love affair with Alfredo Codona, of the famous Flying Codona Brothers.

Like today's Beyonce, Madonna, and Cher, she was known to her vast public by just one name, Leitzel. There may have been some regions on earth where her name was not a household expression, but if so, they were likely on polar ice caps or in the darkest, deepest jungles.
Leitzel was born into Dickensian circumstances, and became a princess and then a queen. She was not much bigger than a good size fairy, just four-foot-ten and less than 100 pounds. In the first part of the 20th century, she presided over a sawdust fiefdom of never-ending magic. She was the biggest star ever of the biggest circus ever, the Ringling Bros. and Barnum & Bailey Circus, The Greatest Show on Earth.
In her life, Leitzel had many suitors (and three husbands), but only one man ever fully captured her heart. He was the handsome Alfredo Codona, the greatest trapeze flyer that had ever lived, the only one in his time who, night after night, executed the deadliest of all big-top feats, The Triple--three somersaults in midair while traveling at 60 m.p.h. The Triple, the salto mortale, as the Italians called it, took the lives of more daredevils than any other circus stunt.