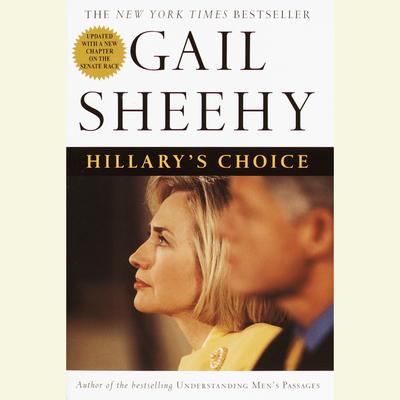 This is the story of a woman and a marriage, both so famous the world over, we think we know everything there is to know. But Hillary's Choice renders America's First Lady fully human for the first time.

Gail Sheehy uncovers the lifelong imprint of Hillary's drillmaster father and the frustrated mother who taught her to bottle up her emotions and who took subversive pleasure in teaching her only daughter how to fight like a man. We listen in as Hillary describes, in letters to a college pen pal, her dreams of becoming a star and her depression when trying to choose an identity. And we meet her first love, the handsome Georgetown man who melted her midwestern puritanism but lost her to the more ambitious Bill Clinton.

We see the arc of Hillary's life through her headstrong choices: as a Yale Law School graduate who chooses to marry an Arkansas boy, thinking she will get him elected to Con-gress and take him back to Washington; as a professional wife who chooses to abandon her own career dream so she can raise a "boy" to be a president; as a woman betrayed once too often who finally confronts her husband and makes the deal that will determine their future.

Sheehy has been observing Hillary Clinton for seven years, talking to her informally and writing about her in Vanity Fair. The biographical portrait that emerges is a tour de force of hard reporting shaped by the intimate contour of the author's unique insights.

The story of the Clinton presidency has always been the story of the Clinton marriage. Delving deep into a relationship that is both supportive and destructive, Sheehy answers the constantly asked question "Why does she stay with him?" How has Hillary preserved her spirit through repeated cycles of Clinton's seduction, betrayal, and repentance? Sheehy peels back the layers of public masks and private denials, showing through one vivid scene after another how Hillary became addicted to Bill, and how desperately Bill depended on Hillary to teach him how to fight and to bring him back again and again from the political dead. Power and shame shift violently from Hillary to Bill and back again as Sheehy deconstructs their embattled co-presidency.

Hillary's Choice reveals much more:  the one serious threat to the Clinton marriage, when Bill fell in love with a woman unlike any of his others; Hillary's symbiotic relationship with political guru Dick Morris; the real reason Clinton couldn't help Hillary pass health care reform; the source of Hillary's crippling hostility toward the press; how Hillary escaped the snare of Ken Starr; how she endured, and capitalized on, the miseries of the Monica year; why she polarizes women; and why she chose to seek her own political voice.

Hillary's Choice brings this tempestuous tale up to date, following Hillary's rebirth as a newly confident woman in her "Flaming Fifties" who is ready to take control of her life. The Clintons' startling role reversal in middle life maintains the suspense: Will Hillary succeed as a retail politician with Bill in the wings as her strategist? Will their marriage survive his postpresidential blues and her possible rejection by her new neighbors in New York?

Gail Sheehy's saturation reporting and candid interviews with hundreds of people--many of them fresh sources with intimate knowledge of Hillary--flesh out the complexities and contradictions that drive one of the most extraordinary political figures of our time.