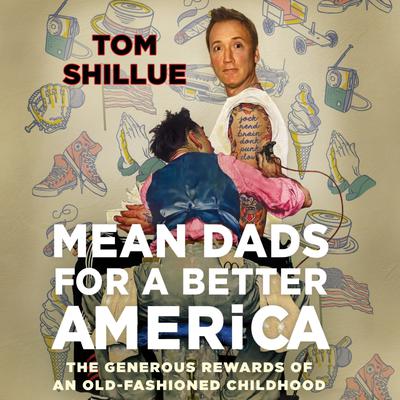 Mean Dads for a Better America

The Generous Rewards of an Old-Fashioned Childhood

From the stand-up comedian and popular host on the Fox News Network, a nostalgic look back at his childhood and the simple American values that shaped his worldview—a portrait of growing up in 1970s America.

As a comedian and conservative thinker, whip-smart funny Tom Shillue grounds his ideas about our current culture and political climate in stories from his childhood. Growing up as one of five kids in a devout Irish Catholic family in a small town outside of Boston, Tom sincerely believes that the rough-and-tumble, rules-dominated world in which he came of age was a better America—a time and place that made him into the well-adjusted, happy, successful man he is today.

In Mean Dads for a Better America, Tom reminisces about his childhood, his family, and the traditional values he cherishes. He takes us back to a time when neighbors disciplined each other’s children without fear of being sued, when kids made it to the family table for dinner, when parents’ rules were gospel, when the occasional fistfight was considered a fair way to solve a problem, and when children were free to roam, make mistakes, and experience the first tastes of independence.

On the Fox News Network, Tom debates, debunks, and entertains with his hilarious approach to issues of the day. Here, he brings that talent and wisdom to the page, tackling the issues that confound many Americans, like our hypersensitive culture and overzealous parenting. As Tom celebrates the stability of family life and the sanity of days gone by, he encourages us to hold on to our sense of humor and look back at our own lives, as we work towards creating a better future for ourselves and our kids, all while making us laugh.