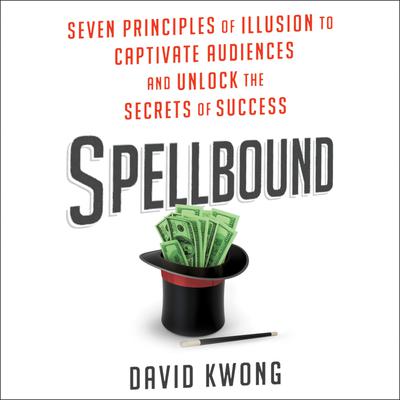 A professional magician and illusionist—the head magic consultant for the hit film Now You See Me—reveals how to bridge the gap between perception and reality to increase your powers of persuasion and influence.

David Kwong has astounded corporate CEOs, TED talk audiences, and thousands of other hyper-rational people, making them see, believe, and even remember what he wants them to. Illusion is an ancient art that centers on control: commanding a room, building anticipation, and appearing to work wonders. Illusion works because the human brain is wired to fill the gap between seeing and believing. Successful leaders—like Steve Jobs, Warren Buffett, and Ted Turner—are masters of control and command who understand how to sway opinions and achieve goals.

In his years of research and practice, David has discovered seven fundamental principles of illusion. With these rules anyone can learn to:

With Spellbound you’ll discover a different way to sell your idea, product, or skills, and make your best shot better than everyone else’s.