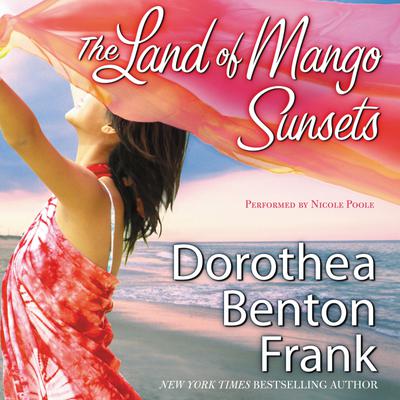 The Land of Mango Sunsets

Dorothea Benton Frank is one of America’s most insightful writers weaving highly addictive tales of the conundrums of life with hilarity and heat. Now, in The Land of Mango Sunsets, Frank gives us one woman’s journey toward a hard-won truth—life isn’t always what it appears to be, and the sooner you realize that pride won’t keep you warm at night, the happier you will be. Oh, and one other thing—a truly joyous life comes with a generous heart.

Meet Miriam Elizabeth Swanson, in a full-blown snit, buoyed by a fabulous cast who run the gamut from insufferable to wonderful. First is the arrival of Liz Harper, Miriam’s tenant from Birmingham, who sets a new cycle in motion. Then her other tenant, Kevin, stalwart companion with more style than Cary Grant, shakes Miriam out of her fog to see which battles are worth the fight. Next, her estranged son announces he’s marrying a Jamaican woman. And what about her ex-husband, Charles, and that sordid lingerie model of his? Well, Harry, her African Gray parrot, has plenty of opinions. Finally, you’ll laugh and cry when she meets a man named Harrison who changes her into a gal named Mellie.

Miriam spins out from the revolving door of her postured life as a Manhattan quasi-socialite while she thirsts, no, starves for recognition. How did she become what she hates the most, and what does she endure to realize it? And where are the answers? It takes a few spins, dips, and one spectacular fall until Miriam gets her head on straight. Then in a whoosh she’s off to the enchanted and mysterious land of Sullivans Island, deep in the Lowcountry of South Carolina.

Told straight from the heart in Frank’s vivid, highly entertaining style, The Land of Mango Sunsets just might be her finest work to date. If you decide to read this book, don’t make plans to do anything else for a while.