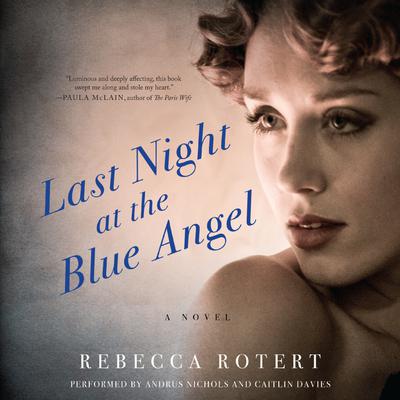 Last Night at the Blue Angel

Set against the backdrop of the early 1960s Chicago jazz scene, a highly ambitious and stylish literary debut that combines the atmosphere and period detail of Amor Towles’ Rules of Civility with the emotional depth and drama of The Memory Keeper's Daughter, about a talented but troubled singer, her precocious ten-year-old daughter, and their heartbreaking relationship.

It is the early 1960s, and Chicago is a city of uneasy tensions—segregation, sexual experimentation, free love, the Cold War—but it is also home to one of the country’s most vibrant jazz scenes. Naomi Hill, a singer at the Blue Angel club, has been poised on the brink of stardom for nearly ten years. Finally, her big break arrives—the cover of Look magazine. But success has come at enormous personal cost. Beautiful and magnetic, Naomi is a fiercely ambitious yet extremely self-destructive woman whose charms are irresistible and dangerous for those around her. No one knows this better than Sophia, her clever ten-year-old daughter.

For Sophia, Naomi is the center of her universe. As the only child of a single, unconventional mother, growing up in an adult world, Sophia has seen things beyond her years and her understanding. Unsettled by her uncertain home life, she harbors the terrible fear that the world could end at any moment, and compulsively keeps a running list of practical objects she will need to reinvent once nuclear catastrophe strikes. Her one constant is Jim, the photographer who is her best friend, surrogate father, and protector. But Jim is deeply in love with Naomi—a situation that adds to Sophia’s anxiety.

Told from the alternating perspectives of Sophia and Naomi, their powerful and wrenching story unfolds in layers, revealing Sophia’s struggle for her mother’s love with Naomi’s desperate journey to stardom and the colorful cadre of close friends who shaped her along the way.

Sophisticated yet poignant, Last Night at the Blue Angel is an unforgettable tale about what happens when our passion for the life we want is at sharp odds with the life we have. It is a story ripe with surprising twists and revelations, and an ending that is bound to break your heart.