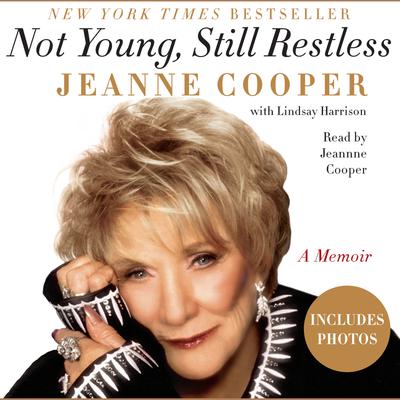 The long-awaited memoir from one of daytime television's most celebrated and beloved actresses.

Three or four days a week, Jeanne Cooper drives from her Hollywood Hills home to the job she's held for more than three decades: bringing life to the character of Katherine Chancellor, the outspoken, powerful, and insanely wealthy force of nature who, along with Jeanne herself, has become a legend in the world of daytime television and its number-one show, The Young and the Restless.

Now, for the first time, her fans will get to know the woman behind the iconic character. With her signature fearlessness, honesty, and humor, Jeanne chronicles her long tenure in Hollywood and describes her life before, during, and away from the CBS soundstage.

Not Young, Still Restless follows Jeanne as she makes her way from small-town Taft, California, to the heart of the Los Angeles movie industry, where the list of her feature-film costars reads like a Who's Who of Hollywood's Golden Age—Maureen O'Hara, Raymond Burr, David Janssen, Robert Taylor, Tony Curtis, Shelley Winters, Glenn Ford, and Lee J. Cobb, to name just a few. Jeanne writes vividly of her first foray into the new phenomenon of television and how she found her home at The Young and the Restless.

Jeanne's story charts the ups and downs of a long and rich life, including the breakup of a marriage that produced the three great loves of her life—her daughter, Caren, and her sons Collin and the actor Corbin Bernsen—before it ended, leaving her a single working mother. She also speaks honestly and openly about her battles to overcome alcoholism, defeat breast cancer, and age gracefully in Hollywood, a process that made her the first reality-television star when her character's (and her own) face-lift was filmed live on The Young and the Restless.

In Not Young, Still Restless, the Emmy Award–winning actress inspires readers with her ability not only to survive but thrive as an octogenarian in today's Hollywood.